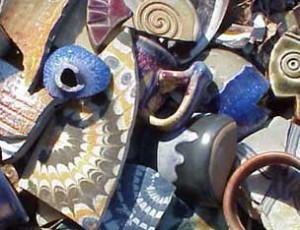 It’s been way too long since I last wrote anything for the SHARDS page. I apologize to those who have had to read the previous SHARDS column so often they have it memorized. It’s not that I haven’t had anything to say to anybody, but rather that I’ve put my comments out in phone calls or e-mails or conversations over coffee.

The spark that caused me to put digital dots to virtual typing paper was a radio news broadcast of a month ago. The commentator said that China had just arrested 774 people because they were doing shoddy work. I don’t know who the workers were as no names were mentioned. I don’t even know what field of employment the workers were employed in. But this gave me something to think about.

My first thought was that the workers were the ones responsible for putting all that lead into all those toys that we imported. Arresting those guys would have been OK with me. But then I continued to think about further implications of the action of imprisoning shoddy workers. My thoughts went to other forms of employment besides toymaking, and it wasn’t long before I shifted my country of interest from China to the U.S. At this point things got more interesting.

I don’t think anybody here ever gets arrested for shoddy work. All you have to do is take a quick look around at your landscape, both inside and outside. How many bad weathermen should be locked up, how many fearmongering news broadcasters and advertising announcers? How many makers of bad foods or bad cars or bad clothes? How about underperforming athletes or overpaid movie stars or just plain bad popular singers? It would be easy to arrest 774 people in each of these trades.

Well, it didn’t take me long to come to the Arts, and POTTERY in particular, as trades to examine. A quick introspective delving into the memory of many galleries visited and countless craft fairs attended over the years led me to calculate that we could populate a small planet with the culprits.

Don’t worry, I’m not going to list ANY of the names I’ve written down. I think a little deeper self-questioning led me to the fearful conclusion that maybe, if this way of thinking caught on, somebody would eventually put MY name on THEIR list. So I guess I’ll quit this SHARDS column right now, leaving you with my wish that all of us, no matter what our field of endeavor, strive to do better work in this new year.

(I know, I know — if I don’t do a better job coming up with more timely SHARDS pages I’ll be put on somebody’s list of shoddy writers — I’ll try to do better — I promise.) (It wouldn’t hurt if you took the time to write me and share your thoughts, too.) (Thank you.) ( )…….